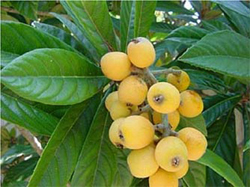 Do You Want To Find Natural Relief From Coughing?

Natural Herb Loquat Extract is a product of Hong Kong. The Chinese brand name, Poon Goor Soe (in mandarin Pan Gaoshou) is the name of the product’s developer, the elderly gentleman pictured on the box cover (his assistant is pictured next to him). This formula has been made for decades and enjoys an international reputation for quality and effectiveness. The main ingredient of the extract formula is loquat (17%), for which the leaf and fruit are considered very useful in treating coughs and moistening dryness. The extract includes fritillaria bulb (15%, labeled incorrectly as lotus root in English), apricot seed (8%. labeled almond extract; apricot seed is known as bitter almond), platycodon root (7%), licorice root (5%), and peppermint (source of menthol, at 1%). It is prepared in a thin water-honey base.

Loquat leaf is often used in Chinese herb formulas and syrups to alleviate “lung heat” syndromes. These diseases are usually caused by infections, though they can arise from other causes, such as smoking. The main application of the syrup is coughs, but loquat leaves also are used to alleviate skin disorders of the face, which are often attributed also to lung heat. The loquat grows in semi-tropical climates, and is native to southeast China, mainly Guangzhou. It is now cultivated in California and Florida. The Chinese name for the loquat, pipa, comes from the appearance of the leaves, which are shaped similar to that of a stringed Chinese instrument (referred to as a Chinese lute) called the pipa (pee-pah).

The dosing of the syrup is two teaspoonfuls each time, about 10 ml. This syrup can be taken 3 times a day, or more often if needed; a bottle contains 180 ml, sufficient for 18 doses. Each dose provides only 9 grams of sugars (mainly from the honey). On the package (under the portraits, is the original Chinese name of the formula, Chuanbei Pipa Gao, which translates to Fritillaria and Loquat Syrup. The Chinese name has been applied to many similar products, because the two named herbs are among the best for alleviating coughs. There is advice on the box (in Chinese) that others should perform acts beneficial to people and not counterfeit the product. Another Loquat Syrup from Hong Kong, Nim Jiom Pei Pa Kao, also has these two key ingredients, but in a thicker honey syrup, which, along with the secondary ingredients, makes that formula especially suitable for treating a scratchy or sore throat.