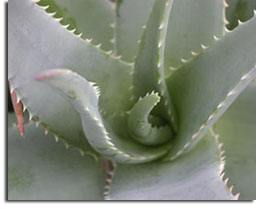 Cleopatra used Aloe Vera as a beauty treatment, and today this remarkable emollient is still used to smooth wrinkles, heal skin irritations, soothe burns (including sunburn) and draw out infection from wounds. Aloe Vera has attracted the interest of modern physicians for its ability to heal radiation burns. Taken internally, Aloe Vera is a powerful laxative, anti-inflammatory and promotes healing. Aloe Vera is a natural source of beta-carotene, minerals, amino acids and the important antioxidant vitamins (A, C, E and B1, B2 and B3).

History:
For more than 3,500 years, healers and physicians have sung the praises of this fragrant desert lily. Pictures of this juicy, succulent plant have been found on the walls of the temples of Egypt, where it was believed to have been used in the embalming process. Alexander the Great was reputed to have conquered the island of Socotra in the fourth century B.C., in order to acquire the beautiful violet dye produced by the species of Aloe (socotrine) grown there. The Greek physician Dioscorides wrote of its benefits to heal wounds and treat hemorrhoids, and the Romans also used the plant to help heal wounds. Aloe originated in southern Africa, and many varieties of this perennial are now cultivated throughout Africa, the Mediterranean and Caribbean regions, and in many countries of South and Central America and Asia. Although there are nearly five hundred varieties of this perennial plant, only Aloe Vera is considered to be the “true” curative healer. Some of Aloe Vera’s constituents include beta-carotene, beta-sitosterol, lignins, saponins, calcium, iron, magnesium, phosphorus, potassium, zinc, amino acids and the important antioxidant vitamins (A, C, E and B1, B2 and B3).

Beneficial Uses:
Aloe Vera is a powerful laxative and known to be one of the finest body cleansers, removing morbid matter from the stomach, liver, kidneys, spleen and bladder and is considered to be the finest colon cleanser known. It will not promote “gripe” (sharp pains and grumbling in the bowels) when used as a laxative, and it is also less likely to cause dehydration from such use.

Aloe is potentially helpful in the treatment of Type-2 diabetes and does not cause weight gain, a common side effect in some diabetes medications. The herb also promotes the absorption of nutrients through the digestive tract and normalizes blood sugar.

Indian Ayurvedic physicians highly recommend the use of Aloe internally as a drink that acts as an astringent for hemorrhoids, in addition to stimulating fertility in women.

In test tube studies, acemannan, a potent immune-stimulating compound found in Aloe, was shown to be active against HIV. In people with AIDS, it soothes the lining of the digestive tract, increasing nutrient absorption. University Maryland researchers found another compound in Aloe, aloe-emodin (responsible for its laxative effect), which appears to kill the viruses that cause herpes and shingles.

Aloe juice also contains aloemannan, a complex sugar that concentrates in the kidneys, stimulates the growth of healthy kidney cells and slows rate of crystal formation.

A medically active complex sugar in Aloe stimulates and regulates various components of the immune system, and some clinics have used Aloe Vera to increase the efficacy of chemotherapy treatments when used with other chemotherapy agents. Aloe protects against skin-damaging X Rays – an effective antioxidant that absorbs free radicals caused by radiation. It also reduces inflammation resulting from radiation therapy and stimulates cell regeneration.

Applied topically, Aloe Vera is known to rejuvenate wrinkled, sun-aged skin, and will stimulate cell regeneration. Application also promotes the healing of sores, insect bites, cuts and burns, and is an effective treatment against psoriasis and eczema. Aloe contains enzymes that relieve pain, and as a mild anesthetic, it relieves itching and swelling. Its topical application will help burns from scarring. Aloe Vera is an astringent and emollient; it is antifungal, antiviral and antibacterial.

A tea made from the dried juice of Aloe Vera Leaf makes a fine mouthwash, effective against cold sores and also a wash for the eyes.

Contraindications:
Pregnant or nursing mothers, children and the elderly should never take Aloe Vera internally, nor should people who take potassium-depleting drugs for high blood pressure. Aloe and prescription medications should be taken at different times. Allergic reactions, though rare, may occur in susceptible persons.