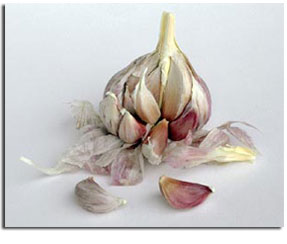 Discover Nature’s time-honored “cure-all” with Garlic! When it comes to fighting infections, Garlic enjoys the reputation as nature’s most potent weapon against germs. Garlic is is said to pulverize viruses, bacteria and fungi. If you want to detoxify your body, promote healthy serum cholesterol and blood sugar levels and enhance your immune system, give Garlic a try; you won’t be sorry!…and now, thanks to modern technology, you can supplement your diet with “odorless” Garlic.

Disclaimer
The information presented herein by Herbal Palace is intended for educational purposes only. These statements have not been evaluated by the FDA and are not intended to diagnose, cure, treat or prevent disease. Individual results may vary, and before using any supplements, it is always advisable to consult with your own health care provider.

History:
Garlic has been prized for at least five thousand years, and so, it is difficult to trace its exact origin. One early botanist considered it to be indigenous to the southwest of Siberia, later spreading to southern Europe. Others claim that it came from Central Asia, where it was considered the most important herb in Persian herbal medicine. It is widely cultivated in the Latin countries bordering the Mediterranean, even growing wild in Sicily. Garlic has been described through the ages in almost spiritual terms and has been called the wonder drug of the herbal world. It is a bulbous perennial with a single stalk that may grow to three feet.

Ancient Egyptians not only worshipped Garlic but also fed it to their slaves to keep them healthy, and a 3,500-year-old Egyptian scroll tells us that healers at that time believed Garlic could help a person fight cancer. Hippocrates (460 B.C.) is believed to have used Garlic to treat uterine cancer. In 1722, Garlic was used to protect against plague in Marseilles, and in London, in the early 1800s, where there was an outbreak of infectious fever in certain poor quarters, the Garlic-eating French priests who treated the sick did not die, but the English clergy, who did not eat Garlic, succumbed to the disease. Garlic contains a sulphide of the radical allil, which is rich in sulphur but contains no oxygen, thus giving Garlic its peculiar, penetrating odor. It also includes enzymes, linalool, oleanolic acid, quercetin, rutin, saponin, stigmasterol, vitamins A, B1, B2, B3 and C, calcium, folate, iron, magnesium, manganese, phosphorus, potassium, selenium, zinc and essential oil. Garlic is known as a natural antibiotic without the deleterious effects of the drugs that kill all life within the body. Today’s orthodox medicine recognizes that the plant is a stimulant for the immune system and a natural antibiotic.

Discover Nature’s time-honored “cure-all” with Garlic! When it comes to fighting infections, Garlic enjoys the reputation as nature’s most potent weapon against germs. Garlic is is said to pulverize viruses, bacteria and fungi. If you want to detoxify your body, promote healthy serum cholesterol and blood sugar levels and enhance your immune system, give Garlic a try; you won’t be sorry!…and now, thanks to modern technology, you can supplement your diet with “odorless” Garlic.

Beneficial Uses:
Garlic helps to detoxify the body. It is said to stimulate the lymphatic system to throw off waste materials. This powerful natural detoxifier helps to strengthen blood vessels, providing protection against pollutants and heavy metal toxicity. It also works to cleanse the kidneys and increase urine flow.

Garlic appears to help promote healthy heart function by maintaining normal blood pressure and blood lipid levels. Scientific studies reported in the German Commission E Monographs support the use of Garlic in lowering excessive serum cholesterol and triglyceride levels in the blood. It is said that long-term use of Garlic helps to lower low-density lipoproteins (LDLs or” bad” cholesterol), while increasing high-density lipoproteins (HDLs or “good” cholesterol). This activity reduces the tendency of the blood to clot, thereby increasing circulation and reducing blood pressure and the risk of arteriosclerosis, stroke and heart attacks. Moreover, Garlic also helps to dilate peripheral blood vessels, thus also helping to balance blood pressure levels. Other studies have indicated that people who suffered heart attacks, and then were given Garlic, had a lower incidence of a second attack.

Garlic is considered a powerful anticoagulant that normalizes blood platelet adhesion by reducing the stickiness of the blood and stimulating fibrinolysis, a process in which blood clots are dissolved. This action also helps to improve blood circulation and combat arteriosclerosis.

Garlic is called a powerful antibiotic that destroys harmful bacteria and leaves behind beneficial bacteria for the body to utilize as an infection fighter. Garlic has been thought to be beneficial in ridding the bowel of parasites. It has also been shown to inhibit the growth of Helcobacter pylori, the bacterium implicated in the formation of ulcers in the digestive system (peptic ulcer). Moreover it is thought to enhance good digestion by increasing bile production and reducing stomach gases. Its antibacterial properties are also believed to relieve bladder infection, strep throat and vaginosis.

Garlic is considered to be an antioxidant that helps to promote healthy immune system function and inhibit destructive, free radical or oxidative damage to tissues or cells. Garlic includes germanium, a mineral that is said to strengthen the immune system and build the body’s defense against harmful infectious invasion. It is believed to activate germ-eating macrophages, cells that are produced by the immune system, and it is thought that chemicals in Garlic reduce the production of toxic, free radicals in liver and lung tissue. Some researchers claim that Garlic use may retard the proliferation of unhealthy cells, including hormone-sensitive breast and prostate cells, among others.

Garlic is regarded as an antiviral and antifungal. The activity of the parasitic fungus that is associated with AIDS is said to be inhibited by the presence of Garlic, and the growth of the yeast organism, Candida albicans, is also said to be reduced by Garlic. Applied directly to the ear canal, Garlic is a traditional remedy for earaches; it retards the growth of aspergillus and Candida, two fungi that sometimes cause ear inflammation.

In supporting healthy blood-sugar levels in late-onset diabetes, Garlic is thought to help regulate blood-sugar levels by tying up the chemical receptors that would otherwise deactivate insulin, the hormone that controls sugar usage and also stimulates the pancreas to secrete insulin. It is said to accomplish this without stimulating weight gain (a common side effect with certain prescription medications). In a 1976 report from the British medical journal, Lancet, it was noted that Garlic (and onion) is very hypoglycemic in nature and can lower blood sugar levels in diabetics, and it should be mentioned that people with high or low blood sugar levels should always consult their physicians before using.

Garlic is said to be an effective expectorant that helps to loosen and rid the respiratory tract of phlegm.

Recommended Dosage:
Take one (1) capsule, two (2) to three (3) times each day with water at mealtimes.

Contraindications:
Taking therapeutic doses of Garlic during pregnancy and lactation may cause indigestion. Because of Garlic’s anti-clotting properties, people taking anticoagulant drugs should check with a physician before taking Garlic. Those scheduled for surgery should inform their surgeons if they are taking Garlic. Because Garlic is hypoglycemic in nature, diabetics and people with low blood sugar levels should always consult their physicians before using.