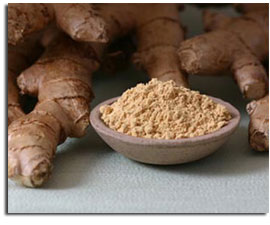 If you have ever reached for a glass of Ginger ale for an upset stomach, you are on the right track! Ginger is an ancient remedy for upset stomach, indigestion, motion sickness, and cramps, and that’s just the beginning. This wonderful food additive can also help reduce fevers, relieve pain and help remove toxins from the body.

History:
Ginger is an exotic, perennial plant with highly aromatic flowers that grows to a height of three feet. It originated in tropical Asia, where its tuberous rootstock was not only used as a spice for culinary purposes, but has also continued to play an important role in Asian medicine for 2,500 years. The Chinese considered it a “warming” herb and used it extensively to warm the stomach, ward off colds, dispel chills, and treat digestive problems, and Chinese ships even carried Ginger on voyages to prevent seasickness. In ancient Greece and Egypt, Ginger was used as a confection, and the Romans considered it a taxable commodity by A.D. 200. The Persians were said to use Ginger as a remedy for arthritis. The origin of Ginger’s name may be derived from two sources: The Greek word for Ginger is zingiberis, and some say it is derived from Zanzibar, from whence it was imported to Europe in the fifteenth century. It is believed that gingerbread was sent as a gift to Russia to celebrate the birth of Peter the Great and was also a favorite in the court of Elizabeth I of England. Ginger had spread to Spain, where it was cultivated, and later, Spanish conquistadors brought it to the New World, where it has thrived as a major commercial crop in Jamaica. Ginger is now cultivated in tropical areas of the world, including Africa, Asia, Australia, and the West Indies. Under cultivation, Ginger seldom blossoms, and the fruit is rarely seen. In Ayurvedic medicine, it is called “the universal medicine,” and in both Ayurvedic and Chinese traditional medicine, its use still comprises more than half of all prescriptions dispensed. Ginger is rich in volatile oils, beta-carotene, essential fatty acids, amino acids, resins, potassium, iron, magnesium, manganese, phosphorus, selenium, zinc, B-vitamins, vitamins A and C and gingerols (including shogaols, a breakdown product of gingerols and are produced only upon drying and twice as effective and pungent as gingerols).

Beneficial Uses:
For nausea, Ginger is a wonderful and time-honored remedy. It is frequently used to settle a queasy stomach, control vomiting and colic, ease morning sickness, motion sickness and seasickness (some research showed it to be even better than Dramamine).

Ginger is said to improve digestion and has been known to pep up the appetite, promote saliva production, combat dyspepsia, and relieve flatulent colic (it is said to prevent flatulence if included with the meal). It is also thought to be helpful for stomach cramps, alcoholic gastritis and hangover. The shogaol content in Ginger increases the activity of the digestive tract and is particularly helpful in digesting rich, fatty foods.

Ginger has been used to cleanse the body of toxins through the skin by stimulating and increasing perspiration and has also been useful in breaking fevers. It is slightly diuretic and further cleanses the body by strengthening kidney function and increasing kidney filtration.

Ginger is a natural blood thinner and may help to prevent strokes, heart attacks, and hardening of the arteries. The chemical gingerol appears to inhibit an enzyme that causes cells to clot and thereby reduces platelet aggregation and blood “clumping.” Ginger helps to retard the production of cholesterol by the liver and has been known to reverse the increase in triglycerides and LDL cholesterol, thus helping to combat heart attack.

As an effective expectorant, Ginger has been used to rid the body of mucus buildup in the sinuses, throat and lungs. For centuries, the Chinese have used Ginger as a drying herb to eliminate mucus and have used it for colds, diarrhea and coughs. This sweet, pungent, aromatic and warming herb is still considered a fine treatment for congestion, colds, influenza, asthma and chronic bronchitis. It is said to ease cold symptoms, and the shagaol in Ginger is thought to kill cold viruses. Its pain relieving properties have been said to ease the abdominal pain sometimes associated with colds and flu and also to counter the pain of strep throat.

>Ginger include treatment of migraine headaches, menstrual cramps and the cramping caused by constipation.

Recent research indicates that Ginger is useful in the treatment of minor burns and skin inflammations.

Ginger is said to increase the absorption and efficacy of other herbs and drugs that are taken with it.