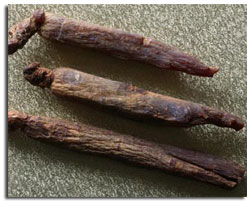 Asiatic Ginger
Many athletes swear that Korean Ginseng gives them a competitive edge; women drink it to alleviate unpleasant symptoms of menopause; and millions of people have used this “wonder herb” to cope with stress and also as a stimulant and tonic. Researchers claim that it lowers cholesterol (especially LDL or bad cholesterol), acts as an aphrodisiac, improves mental function and increases the body’s energy and stamina. Long considered it to be an overall body tonic, Korean Ginseng is believed to vitalize, strengthen and rejuvenate the entire body.

History:
The Mandarin word for Ginseng is Len seng, which literally means Root of Man, and the name Ginseng comes from the Chinese jen shen, also meaning Man Root. This low-growing, perennial shrub, native to the cool-summer regions of China and North Korea, takes at least four years to mature, and it has been a part of Chinese medicine for over five thousand years. It was first mentioned in the Shen Nong Herbal (compiled between the first and second centuries B.C.) as a superior drug, suitable for long-term use without toxic effects, and it was long considered an “anti-ageing” herb. Another Asian species (Panax pseudoginseng) is native to Japan and may be used for the same purposes. Ginseng was traditionally used to curb emotions, stop agitation, brighten the eyes, enlighten the mind, and increase wisdom. The herb was also commonly used by elderly people to improve mental and physical vitality. The reverence with which some hold Ginseng is reflected in its botanical name, Panax, which is derived from the Greek word for panacea or all healing.

With regard to cognitive ability, Korean Ginseng is said to significantly improve abstract thinking. Several studies have found that treatment with Ginseng improved the ability to complete detailed tasks, perform mental arithmetic and improve memory, attention, concentration and a general ability to cope.

Korean Ginseng has long been reported to be an aphrodisiac: Chemicals in Ginseng are thought to stimulate the part of the brain known as the hypothalamus to direct the production of hormones that stimulate cell growth and healing in the sex organs. It is also believed to promote better blood circulation within the penis, and an Italian study found that Ginseng use increased testosterone levels, as well as the number and motility of sperm cells.

Korean Ginseng is considered an “adaptogen” in that it normalizes body functions during stressful or other situations that would alter those functions, helping the body to adapt and return to an overall sense of well-being. Dr. I. Brekhman, a Soviet scientist, was the first to describe this unique ability to normalize body functions. For example, if blood sugar levels drop too low, or blood pressure climbs too high, an adaptogen will aid the body’s return to normal function.

Korean Ginseng is thought to prevent liver damage in people who have been exposed to various drugs and toxins. It has also been used to help in withdrawal from methamphetamines and cocaine.

When taken in lower doses, Korean Ginseng acts as a sedative, and in higher doses, it is a stimulant.

Many women have claimed relief from hot flashes and other discomforts of menopause when taking the herb. Lab studies indicate that it increases ovarian estrogen production in early menopause.

Korean Ginseng is said to enhance the breakdown of alcohol in the body and therefore may shorten a hangover.

Panax Ginseng has been used to help the digestive system and stimulate the appetite, and some herbalists have used it with some success when treating anorexia. It is also said to reduce digestive upset caused by emotional stress and inhibit ulcer formation.

Korean Ginseng may be very beneficial to good heart health: Studies in Japan have shown that taking Panax Ginseng will lower LDL or “bad” cholesterol and raise the beneficial HDL cholesterol. This action is believed to increase blood circulation, reduce blood pressure and reduce the risk of strokes, arteriosclerosis and heart attacks. Long before scientists researched this herb, Chinese herbalists prescribed it to normalize blood pressure, improve blood circulation and prevent heart disease. Modern tests have shown that Korean Ginseng slows the heart rate and reduces the heart’s demand for oxygen. It is also said to increase the strength with which the heart muscle can contract, and protects the heart from myopathy, a weakness or wasting of the heart muscle.

With regard to invasive disease, Japan’s Kanazawa University’s preliminary research found that unpurified Panax Ginseng’s saponins (or ginsenosides, the main active ingredients in Ginseng) not only inhibited the growth of cancer cells, but also actually converted the diseased cells to normal cells. Polyacetylinic alcohol, a compound in Korean Ginseng is said to retard cell reproduction in tumors, and the ginsenosides in the herb have been found to induce cell differentiation, a prelude to natural cell death in leukemia cells. Another Korean study found that Ginseng destroys lung cancer cells that are resistant to standard chemotherapy drug treatments.

Non-saponin constituents in Korean Ginseng root appear to be responsible for its ability to lower blood sugar in diabetics. People with Type-2 diabetes often find that after two weeks of consuming Ginseng their blood-sugar levels go down considerably, and and it may reduce insulin requirements and prolong the effect of injected insulin. Diabetics should take Ginseng only under a physician’s supervision.

There have been reports of interactions between Ginseng and MAO inhibitor drugs, digitalis, warfarin (Coumadin) and high doses of prescription steroids. Pregnant women and nursing mothers should not use Ginseng, and diabetics should consult a physician before using. Avoid taking Asian/Korean Ginseng for two weeks prior to elective surgery.

The American Academy of Family Physicians has a very informative article about Panax (Korean) Ginseng.