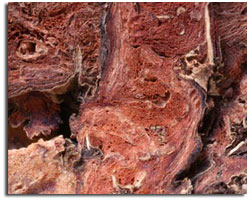 Suffering from stress? Fight fatigue and help combat temporary depression with Rhodiola Root. Athletes like the stamina-building properties of Rhodiola Root, and this arctic native has been used to fight infection, anemic conditions and heart problems, while helping to enhance mental clarity and sexual function. It may also be useful for fighting fat!

History:
Rhodiola Root is a native of the arctic regions of eastern Siberia and may also be found in the mountainous regions of Asia and Europe at altitudes of eleven- to eighteen-thousand feet above sea level. The herb grows to about two and a half feet in height, and the fragrance of its flowers is similar to attar of roses, which is the reason it was given its botanical specific, rosea, and one of its common names, Roseroot. Rhodiola Root is a perennial plant with red, pink, or yellowish flowers and has no biological relation to the “common” rose, but due to its similar fragrance, it has been used as a substitute for attar of roses. Its use in herbal medicine reaches back for centuries: The Emperor of China organized expeditions to Siberia to bring back this highly valued plant, and Rhodiola Root was used by the Vikings to enhance their physical stamina and strength. In the 1930s, extensive research began in Russia, Scandinavia and Germany to seek the secrets of the “Golden Root” that had been used for centuries as an anti-ageing miracle that helped the people of Siberia cope with the cold climate and stressful life. In recent history, Rhodiola Root has been widely used by Russian athletes and cosmonauts to increase energy. Some of the constituents in Rhodiola Root include glycosides (rosavin, rosin, and rosarin) and monoterpenes (rosiridin and salidroside).

Beneficial Uses:
Rhodiola Root is an “adaptogen” and is said to stimulate and protect the immune system by reinstating the metabolic balance in the body after stressful situations. It helps the body adapt and return to normal function and a sense of well-being when exposed to stresses that would alter those functions. Use of Rhodiola Root is also thought to promote faster adaptation to climatic and social changes.

Rhodiola Root is believed to be an aphrodisiac for both men and women, helping to increase sexual potency in men, managing erectile dysfunction and/or premature ejaculations, and also normalizing prostatic fluid. In traditional medicine the herb was given to married couples to increase fertility.

Researchers have recommended Rhodiola Root for anyone suffering from temporary depression, stress or anxiety. Used as an antidepressant, all subjects in clinical tests showed a positive therapeutic effect with its use. It is thought to work by making serotonin’s precursors (tryptophan and 5-HTP) more available to the brain and by optimizing the amount of serotonin, dopamine and other neurotransmitter levels in the brain.

Athletes use Rhodiola Root to improve physical performance and maintain energy and endurance levels in various sports. It is said to be particularly valuable for body builders, because it is thought to stimulate muscle energy status, glycogen synthesis in muscles and liver, muscle protein synthesis and anabolic activity. The herb is believed to increase strength and mobility and also to shorten recovery after strenuous and prolonged exercise and workouts.

Rhodiola Root is considered a heart healthy herb that may protect against heart ailments. It appears to decrease the amount of adrenalin and cortisol released during stress and defends the heart against “adrenalin burn.” It is believed to lower serum fats and cholesterol, while increasing the resistance of blood vessels to cholesterol plaques, thus helping to increase blood circulation and reducing the risk of arteriosclerosis, strokes and heart attacks. In clinical tests, Rhodiola Root was shown to reduce and/or prevent stress-induced cardiac damage, decrease myocardial catecholamines and cyclic adenosine monophosphate levels and activated receptors in the heart muscle, preventing arrhythmias.

Rhodiola Root has been recommended for or anyone requiring more mental clarity or anyone who has memory problems. Because the herb is believed to improve blood circulation, this activity apparently increases the blood supply to the brain, enhancing both cognitive function and attention span. It is also thought to increase bioelectrical activity in the brain, which also may improve memory and brain energy.

Studies show that Rhodiola Root may be effective in promoting weight loss by stimulating the “lipolytic processes.” It seems to have the ability to mobilize fromadipose tissue and activate adipose lipase, a key enzyme required to burn the body’s fat stores. This process helps to stimulate the natural fat burning system in your body that is needed for weight reduction.

It is thought that Rhodiola Root may possess potent antioxidant properties. Russian researchers have found that in laboratory tests, it inhibited the growth of, and improved immunity to, various types of serious invasive illness.