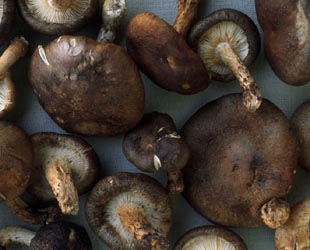 Shiitake Mushrooms is becoming well known as a superior way to improve your health and stimulate your immune system. Try it to build resistance against virus, infection, the common cold

and macular degeneration, among many other ailments. Much research has been done in recent years, and numerous imunostimulating qualities have been attributed to this wonderful fungus.

History:
The wild Shiitake Mushroom is a light amber fungus that is native to Japan, China and other Asian countries, and is now widely cultivated throughout the world, including the United States. The caps have nearly ragged gills and an in-rolled margin when young, and they are covered with a delicate white flocking. The mushrooms are frequently found on downed hardwood trees and have been used as a food and medicinal source for over three thousand years in the Far East. Legend claims that Shiitake was given by the aboriginal people of Japan to their emperor, Chuai, around the year 200, but they were used long before that in China. In the Orient, several types of mushrooms have been used for centuries to maintain health, preserve youth and increase longevity. Wu Ri, a famous Chinese physician from the Ming Dynasty (A.D.1368-1644), described Shiitake’s ability to increase energy, cure colds and eliminate worms. Japanese physicians have long used lentinan’s immune-stimulating capabilities in cancer treatments, and modern Japanese physicians use it to treat viral infections. Now popular in the United States as a tasty alternative to the blander varieties more commonly found in food markets, there is enormous interest in the Shiitake mushroom, and much research is being conducted into the possible great health benefits that may be derived from it. Some of the constituents in Shiitake include fatty acids (largely unsaturated), proteins (containing all the essential amino acids and non-essential amino acids), eritadenine, vitamins D, B-2 and B-12, and the important and active glucan polysaccharide, lentinan.

Beneficial Uses:
Shiitake Mushroom is believed to promote healthy heart function and prevent heart problems. It is thought to be beneficial in lowering levels of both total cholesterol and LDLs (“bad cholesterol”). In laboratory tests, the alkaloid, eritadenine, was said to reduce the total cholesterol levels by twenty-five percent in one week, and the effect was more pronounced in subjects who ate high fat diets than in those on low fat diets. Japanese scientists have found that Shiitake accelerates the accumulation of LDL in the liver, where it is then converted in HDL (“good”) cholesterol. Shiitake is also said to promote normal blood pressure levels.

Shiitake Mushroom is believed to build resistance against viruses and stimulate the production of interferon, a protein compound that slows the course of viral infection. Japanese physicians use lentinan when treating people with HIV/AIDS (by injection), and may be beneficial in cases of chronic fatigue syndrome, hepatitis and Lyme’s disease. Interferon is also reputed to rein in the blood vessel overgrowth experienced in macular degeneration.

In regard to immune system stimulation, the glucan polysaccaride, lentinan, in Shiitake Mushrom is said to heighten the production of interleukin, a hormone that stimulates the immune system to produce B-cells that create antibodies and helper T-cells that coordinate the immune response against infectious microbes and cells. It is also thought to build resistance by activating the immune system’s lymphokine-activated killer cells (LAK) and natural killer cells (NK) to combat various types of infectious materials and invaders.

Shiitake is the basis of several extracts including lentinan, and chemically, the sugars in lentinan form a helix that is structurally analogous to the helix of DNA, accounting for many of lentinan’s healing properties.

Japanese researchers have claimed that lentinan may prolong the survival rate or possibly lower the discomforts and/or damage associated with chemotherapy. In addition, it may improve the quality of life, providing substantial relief to patients who have undergone such therapy.

People with bladder cancer should not use Shiitake (or eat) raw Shiitake Mushrooms. The mus