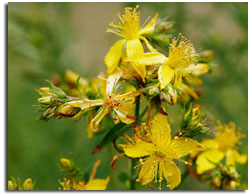 St. John’s Wort is powerful natural medicine for temporary depression. It has become the world’s most popular herbal supplement for banishing the blues and controlling stress and has also been used to treat chronic fatigue syndrome, anxiety and a host of other ailments.

History:
St. John’s Wort is a perennial plant, native to Western Asia, Europe and Great Britain (especially in Wales). The herb grows in well-drained to dry soil in partial shade to a height of about thirty-two inches and bears bright yellow petals with flowering tops. The plant allegedly possessed mystical and magical powers, partly due to the fluorescent red pigment, hypericin (one of its most powerful chemical constituents) that oozed like blood from the crushed flowers. If you rub the petals of this flower between your fingers, that red resin will ooze out, and according to one legend of the Middle Ages, this plant sprang from the blood of St. John the Baptist when he was beheaded. Another legend says the plant’s name came from the fact that it bloomed around June 24th, which is the feast of St. John on the Church calendar. In Middle English, the term “wort” referred to any plant or vegetable that was used medicinally, and this herb was used in herbal medicine in medieval England to treat attacks of insanity attributed to the work of evil spirits or the devil; hence, one of its common names, “Witches’ Wort.” European settlers brought the plant to the United States in the 1700s, and although it has been used for at least two millennia, it did not become popular in the North American media until the 1990s. Today, there is much research being conducted into the plant’s potential uses. Some early studies indicate that the hypericin in St. John’s Wort may help to slow the spread of breast cancer to tissues between the chest wall and the lungs, and oddly, hypericin’s efficacy appears to be increased by exposing the skin to sunlight, since the herb increases photosensitivity. Moreover, some early trials have demonstrated that tumor growth was inhibited by the hypericin content. Again, because it has been used as a photodynamic therapy in the treatment of certain cancers, St. John’s Wort utilizes that sensitivity to light and may produce positive results in the treatment of skin melanoma. These treatments, of course, were conducted only under strict medical supervision. Traditionally, the petals were gathered in midsummer for use in herbal medicine, but today, the entire plant is used. Aside from its valuable use as a calming herbal supplement, the plant yields a red dye and is also used in cosmetics. Some of the chemical constituents in St. John’s Wort include carotenoids, hyperforin, hypericin, pseudohypericin, chlorophyll, essential oil, flavonoids, acids, saponin, tannins and vitamin C.